I don’t know about you but I love hearing how Christmas is for different families and about their different traditions. Alan from the blog Baby Pink & The Boys tells us about his Christmasses both as a child and now as a Dad himself…
***
I often wonder how the same celebration can be so different. Take for example my house growing up and how we celebrate now with our daughter and the boys…

Christmas as a child:

We always had a real tree. The start of Christmas was when we went as a family and picked the tree together. We still do, when I’m in the US. I have to say I do enjoy the drive to the mountains to the tree farm. Walking between the rows of trees in the snow to find that perfect tree. I’m not so keen on decorating it though. I’m still not!  Then out would come the Christmas CDs . Not ‘Now That’s What I Call Christmas,’ but Bing Crosby, Alex Jones, etc.

Packages would start to arrive from the States containing presents from Granny, Aunts and Uncles. These would go straight under the tree not to be touched until Christmas Day. Although I have to admit to a bit of package shaking and maybe even the odd tearing of a corner or two of paper to find out what they contained. Even my Dad was caught doing this!

Christmas Eve we’d leave out Milk and homemade cookies for Santa. Poor Rudolph, I don’t recall leaving a Carrot for him! Dad would read T’was the Night Before Christmas and off to bed we’d go. Where we would remain until called by Mum. I swear I never ever crept downstairs in the middle of the night for a sneaky peak or even to have a play with some toys before going back to bed to wait being called 😉 . Mum would then call us and we’d rush down to “act” surprised at the toys Santa had brought us. After a few minutes of photos and amazement at all the goodies we’d got it was time for breakfast. Always the same: my Mum’s homemade sweetbread, crispy bacon, scrambled eggs and juice.

We then got a chance to play with our new toys until it was time to get ready for mass. Into our new outfits and off to church. The whole time I’d be looking at my Mickey Mouse watch hoping it would end soon so we could go home and open the presents under the tree. Finally after what seemed an eternity mass was over and it was present time. Nothing against Santa’s presents but I always wanted the ones from Granny. She spoiled us. I still remember some of the presents she sent me: a remote controlled Audio Quattro one year, Bobba Fetts ship another.

After these were opened Mum would go to finish cooking dinner and we’d be left to play or read our new books. Dad lit the fire and if we were lucky weather was nice enough to go outside on new bikes or roller skates. Then time for dinner. Always traditional Turkey and Ham with all the trimmings.
3pm and we’d all watch the Queens speech. Strange really, as my parents were American. After this we’d all watch a movie. Not James Bond or Escape to Victory, always Oliver, My fair Lady or, hopefully not, Gone with the Wind. Being from the deep south in the US this was a must watch for us.  Turkey sandwiches for tea, we called it supper, and then off to bed with the new cuddly toy and a book.

Christmas with our baby girl and the boys: this will be our daughter’s first Christmas and I’m sure she won’t have a clue but the boys will be spoilt and over indulged as normal.  I delayed as long as I could in putting the tree up. When the Late Late Toy Show is on I can’t put it off any longer. Every child in Ireland stays up late for this annual Christmas programme. The parents sit their feeling jealous, as those in the audience get given loads of free stuff. The kids see toys they hadn’t considered and start amending the Christmas list!! This year was the first year I put the tree up whilst the boys were in school. Normally we do it together and then I redecorate once they are in bed. Santa’s lists have been done. Although we’ve yet to write and post the official letters. We will do the annual trip to visit him one weekend and on Sunday the 19th will go to see the Coca Cola Truck again. 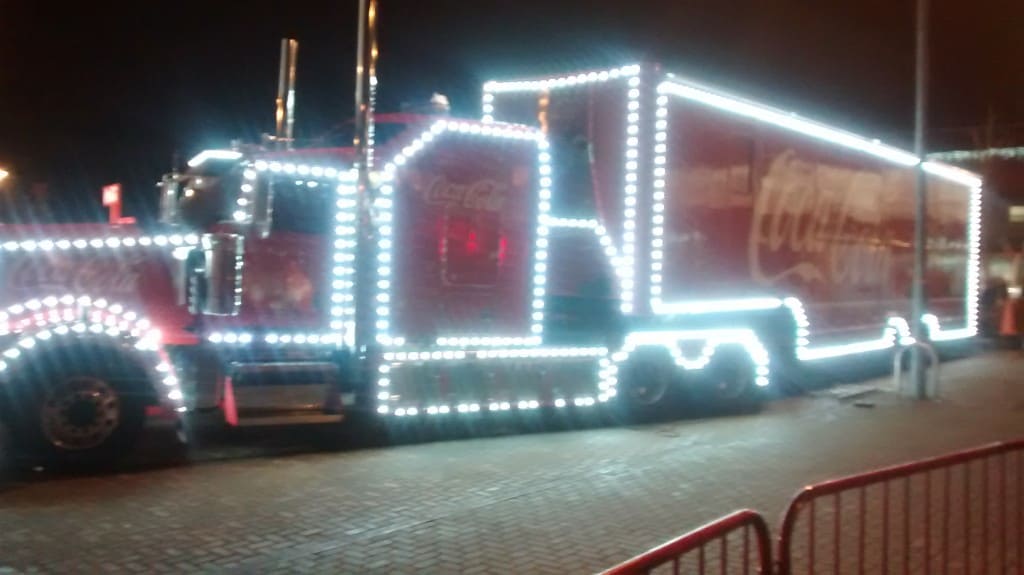 On Christmas eve we watch a Christmas movie together. Elf, The Santa Clause, etc. Then the milk, biscuit and carrot are left out and it’s off to bed. I’ll make my normal joke about Santa preferring a Budweiser, no one laughs and he always gets milk!  Christmas morning and the boys wake. Normally we’ve had to run the Autistic lad back to bed every half hour from about 2am. At about 6.30am we are too tired to keep putting him back in, so up we get. This year it will be a hushed excitement so as not to wake the baby!

Paper will be ripped, photos hurriedly taken and herself will try to clean as we go. Within minutes presents will all be opened and batteries put in to electronic toys, Playstation and XBOXES turned on to try out the new games. Fifa 16 featured on all lists!  Herself and I will get coffee and make breakfast before they get at the chocolates and sweets Santa left. Our daughter might wake about now, so back to the living room we will go to watch/help her open her presents. Then between “Dad help! It won’t work!” “Where’s my ……?” and other calls for assistance, I’ll get the turkey into the oven, herself will get veg ready. We will all sit down for dinner: turkey, ham and pork to cater to all tastes…

No queens speech, instead it’ll be a movie! No football to fight and argue over for one day.
A call to the US to Nanny, Grandad and the children’s Aunt to finish the day, before its off to bed accompanied by the new favourite toy. Even if it is hard plastic.  Hopefully the baby will stop teething for the day and I may get a glass of wine and maybe a bud or two.

Merry Christmas to you all!

*Alan Herbert is a 40 yr old Father to 4 children. 3 boys and now a girl! Dad to two of them. He blogs over at Baby Pink & The Boys and can be found on Twitter, Pinterest and Instagram.

***
If your child believes in Father Christmas and you want to keep the magic for as long as possible, Elfie’s Christmas Letters (advent letters) and our North Pole Christmas Letters are absolutely perfect and still available to order!

Come and join us on Facebook and over on Christmas Traditions & Magic For Children. The Shop is still open for Christmas 2015.

To receive our blog posts, please sign up at the right hand side of this page or for Product or Christmas News and promotions from the International Elf Service, please sign up at the bottom of the page. This year’s series of ‘Elfie’s Christmas Letters’, ‘North Pole Christmas Letters’, a shorter set of letters from different elves from the North Pole, Elfie’s Birthday Letters and other fun products are in the shop too!