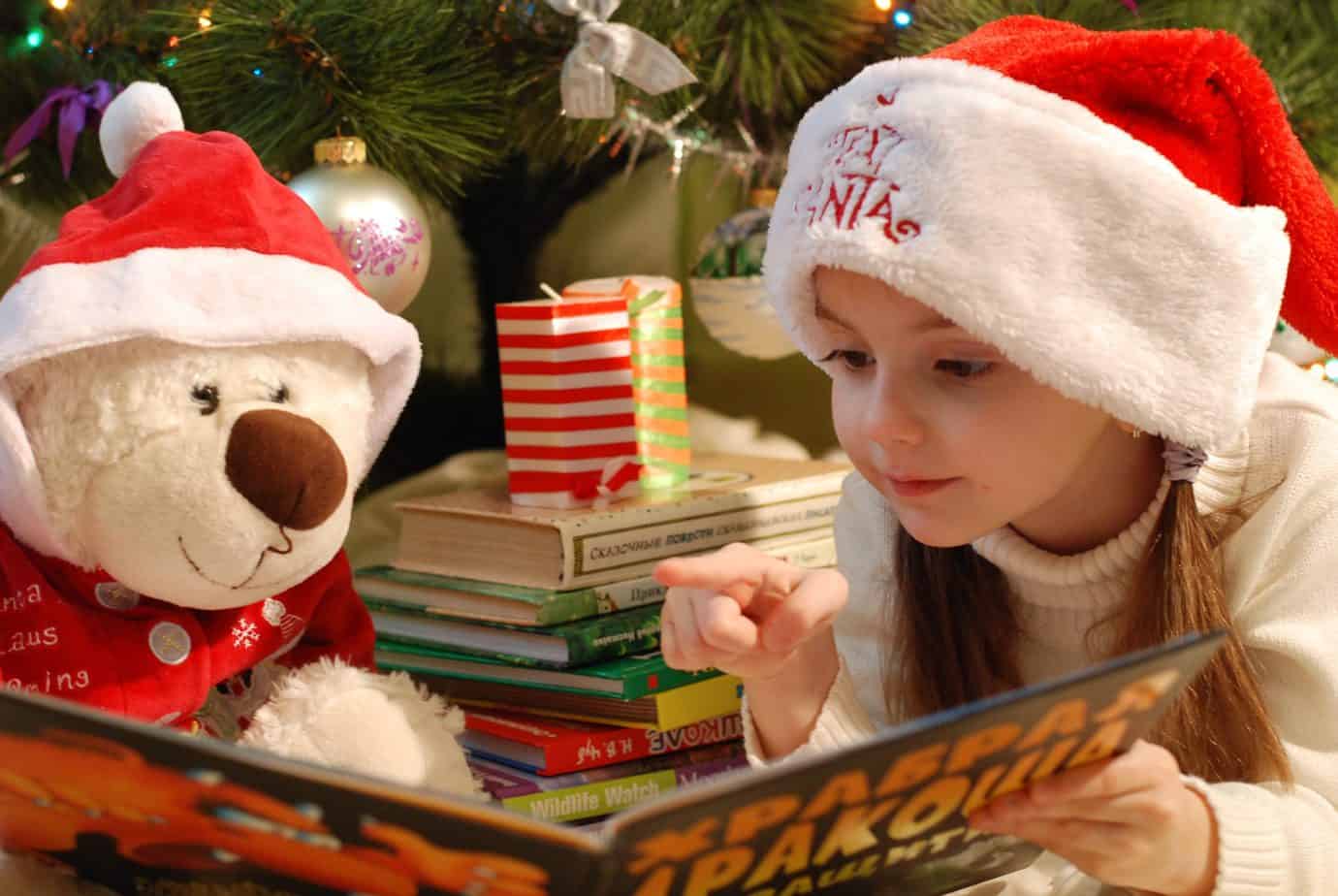 Children are known for suddenly asking their burning questions about Father Christmas when you’re least prepared … and usually when younger siblings are around! To save you having to think on your feet and come up with a Christmas magic-saving answer (and because I’m lucky enough to have a hot line to the North Pole) I’ve answered some of their most common questions for you. Do let me know if you have any others and I’ll gladly add them and answer them for you!

*Please sign up to our Elf Club too. We’d love to see you x

Why does Father Christmas use the same wrapping paper as us?

There’s always a naughty Elf who unwraps your presents. So if he has time, Father Christmas borrows some of yours to wrap them up again!

Each year the Elves toss a chocolate coin to help them decide whether or not to wrap the presents.  So far, the coin has landed on ‘YES!’ every single year.  Amazing!

We don’t have a chimney, so how does Father Christmas get into our house?

Father Christmas usually lands the Sleigh on the roof of each house, so if there’s a chimney, Father Christmas will always use that as it’s closer (and quicker and MUCH more fun). BUT if you don’t have a chimney, he uses a special magical key that works in any door of houses where families are hoping he’ll visit.  Some families leave a magic key out for him to use too.

How does he get all around the world in one night?

Two things mean this is possible …

2. Time stops for Christmas magic.  When Santa gets to each country, time freezes in that country until he’s delivered all the presents to all the children and then it starts up again.

Are these really Father Christmas’ footprints?  It doesn’t look like snow!

Well they certainly look as if they could be his footprints?  It isn’t actually snow anyway, it’s atomic stardust from travelling so quickly through the sky. 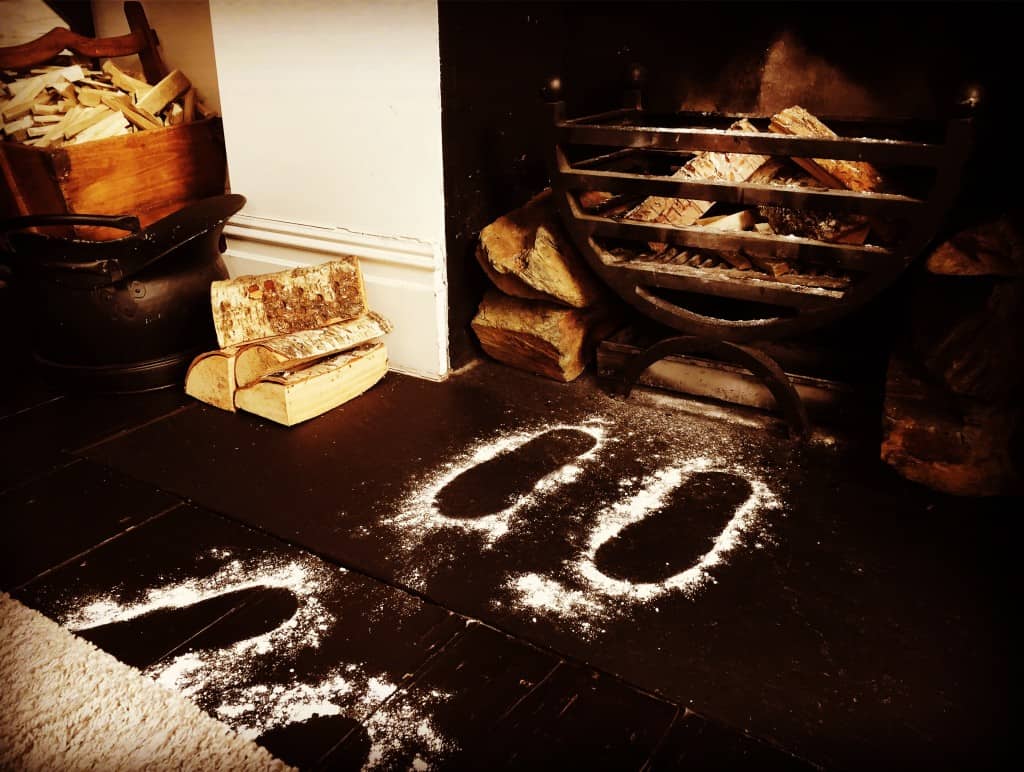 Is the Santa at the Grotto the real one?

If Father Christmas is particularly busy in the North Pole, he sends a helper to the Grottos around the world instead.  We can never be sure whether we’re meeting the real one or not, but it doesn’t matter because the real one knows them all very well indeed.

How do the reindeer fly?

Here are the ingredients for Magic Dust …

How does Father Christmas fit down the chimney?

Before he can do anything – Father Christmas checks the Sleeping Children Detector on the Sleigh and puffs Emergency Sleeping Powder over the house if any are awake.  Last year’s batch only lasted for 46 seconds, so he didn’t have any time to get stuck in any chimneys!

Christmas Magic means he can get down any chimney, but he still tends to get stuck in very narrow ones.  The Elves make sure he has a full can of quick release Anti-Stick Spray on the Sleigh, which he can use if he thinks it’s going to be a bit of a squeeze!

Why doesn’t the dog bark at him when he comes?

Father Christmas would like nothing better than to see all your excited faces in the middle of the night, but he knows he wouldn’t be able to get all his deliveries in time because he’d be too busy chatting to you all!

How does Father Christmas know what I want?

When you write to him, your letter whooshes out of the Magical Wind Machine up in the North Pole, straight into the Mail Room. The Elves in the Mail Room put all the letters from children into big sacks, put them on a sledge and take them over to Father Christmas’ house, Christmas Cabin.

Some people have Elves that visit them through December.  These Elves see what you enjoy playing with, and report back to Father Christmas when they go back to the North Pole each night.

How does Father Christmas make so many toys?

Elves can work extremely quickly and make thousands of things every hour.  Time is very different in the North Pole.  One Elf in particular wastes rather a lot of it inventing things …

How does he know where I live?

Father Christmas has a very special compass that he uses on Christmas Eve.  As he flies over all the houses, it shows him which one is yours!  Your address is also registered in his Big Book of Christmas Magic as a back up.

Will Father Christmas know where our new house is?

Of course!   Every time a child moves house, the new address gets entered into the Big Book of Christmas Magic automatically.

Yes. The Tooth Fairies and the Elves (and Father Christmas too) meet up once a year for a gigantic festive feast.

Why do we get presents from Father Christmas?

A long time ago, there were some very poor children who had only sticks and the dirt outside to play with.  Father Christmas heard about these children and made them a very simple wooden toy each, which he left outside their front door on Christmas Eve.  Since then, he’s enjoyed giving toys to children all around the world.

Ways to Handle the “Is Father Christmas Real?” Question

Interview With A Christmas Elf